We are pleased to invite you for the first international H2 Summer School organized by Professor Adélio Mendes (University of Porto) and EMPOWER project, taking place from 20th to 24th of September 2021.

The summer school is aimed at science and engineering students and professionals interested in learning more about the hydrogen economy. It includes in-depth lectures on hydrogen production, storage and transportation, fuel reforming and fuel cell application. Guest speakers from innovation leaders, such as VTT Technical Research Centre of Finland, Catator AB (Sweden) and Blue World Technologies (Denmark) will join us and provide lectures on their field of expertise.

Registration is free but necessary to participate in the summer school (maximum of 100 participants). To register, send an email with your name and affiliation to luismartins@fe.up.pt. 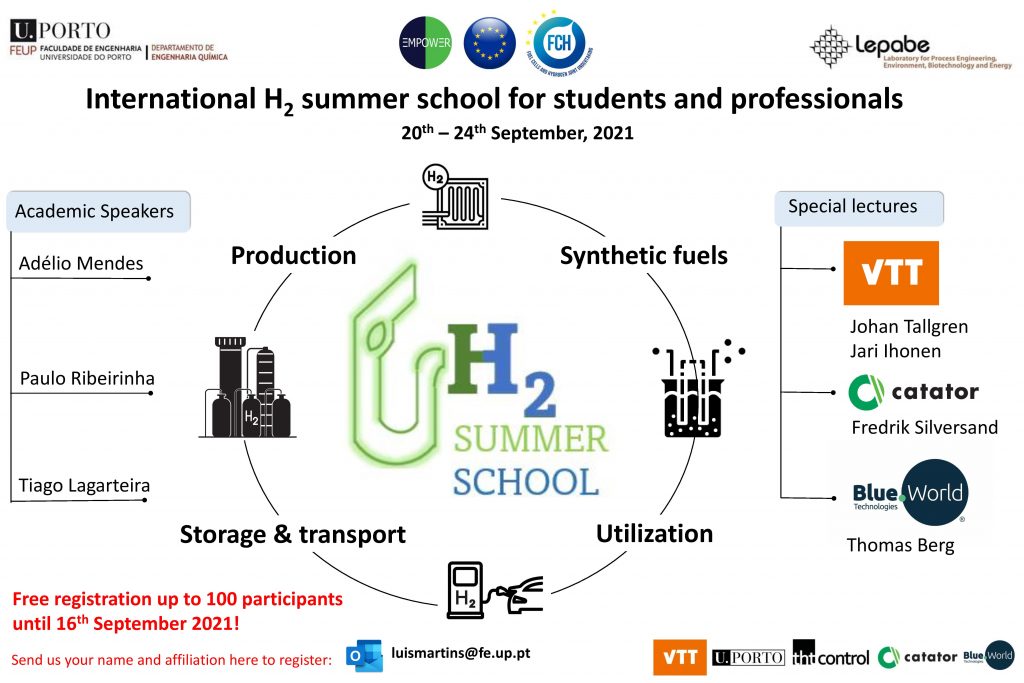 The EMPOWER project partners are pleased to invite you to a webinar 15.12 on methanol powered fuel cells, their applications and the potential of renewable methanol.

The EMPOWER 6/2020 newsletter has been published.

The EMPOWER project kicks off in Espoo

EMPOWER is receiving EU funding of 1.5 M€ from the the Fuel Cell and Hydrogen Joint Undertaking (FCH JU) programme under grant agreement no. 875081. The Joint Undertaking receives support from the European Union’s Horizon 2020 research and innovation programme, Hydrogen Europe and Hydrogen Europe research. The project is coordinated by VTT in collaboration with four other European partners.

The EMPOWER project will develop, manufacture and validate a methanol fueled 5 kW combined heat and power (CHP) system based on high temperature PEM fuel cell technology. The project will enhance the system efficiency to target the mini-CHP market and provide a cost competitive and low carbon option. The developed CHP unit will be capable of fast start-up and fast dynamic response to help integration of intermittent power production from renewable energy sources. The developed system will be validated and demonstrated for six months at the site of an end user. Target customers include end users from the industrial, construction and defence segement.

Methanol is a liquid fuel, which can be stored in a cost-effective way by using existing non-pressurized tank systems and is easily distributed through the existing infrastructure of road tanker trucks and refueling stations. Advantages of using methanol in an efficient high-temperature PEM fuel cell CHP system include reduced greenhouse gas emissions, cost-effective and high-density on-site energy storage, noise reduction, and low levelized cost of energy.

Blue World Technologies ApS is a young company focused on methanol fuel cell systems for automotive and other applications. Accumulated, the company has more than 220    years of fuel cell experience.

Catator AB is a high-tech company in the field of catalysis and catalytic process design. Catator is to become a key supplier worldwide of high quality catalytic systems for efficient energy supply.

THT Control Oy has more than 20 years of experience in industrial automation. It designs and provides tailor-made automation solutions to customers of all sizes, both industry and private sectors.